The Sycophancy of Little Evan Stone and Educators4Excellence Continues 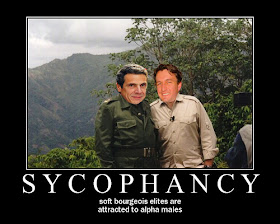 Every time I see a Little Evan Stone and Princess Sydney Morris propaganda column in The New York Post or in fact anywhere I feel that it must be treated as if one were looking directly at Kollos, the Medusan ambassador.  But in reality, Little Evan and Princess Sydney are not Kollos, but more like Twiddle-Dee and Twiddle-Dum and just looking at them and reading what they wrote, or at the very least, what they were told to write invites laughter and derision.

In their latest mindless missive in the official propaganda publication of the NYC DOE, The New York Post, Little Evan and Princess Sydney start my sucking up mightily to Governor Andy's colon when they say, "Gov. Cuomo recently called himself “the students lobbyist.” In fact, he just may be the only effective lobbyist that teachers have right now, too.

Yes great start. So proud.
They blither on; For two years, classroom teachers across the state have been waiting for a new system of evaluation they were promised as part of the state’s Race to the Top package, a package passed into


Yes, of course. Every teacher I have spoken with is just sitting on their edge of their seat with pins and needles just gosh darn waiting for that evaluation agreement to be approved. Not. Rather I know teachers who are waiting for a computer that was built after 1999 to be placed in their classroom. A computer that prints. A ream of paper from Staples. A proper curriculum. A curriculum. Competent administrators. Administrative accountability. Toilet paper in the bathrooms. Respect. Less paperwork. Less testing. Les Nessman. Text books. Basic supplies. A photo copier that works. Shall I go on. I think most people get the idea.


It's hard to believe that a mayor that has systematically destroyed education in this city has been allowed to skate by virtually unscathed. Is that not the bigger horror?

But, again it is the administrator's fault. Every rating sheet has a check off boxes and a comment box. Simple, have principals use them. Require principals throughout the year meet with teachers, either informally, formally, or both and have a peer to peer discussion about that teacher. Simple. By the way, my way would be a lot, lot less expensive to implement.

The biggest sticking point in negotiations was the UFT’s insistence on an unnecessarily arduous appeals process.

So I would assume that both Little Evan and Princess Sydney find that an independent arbitrator that will not be beholden to either the DOE or the UFT is unnecessarily arduous? Then I must agree that both these little elite children must find that an impartial judge and jury in our criminal justice system seems to them to be unnecessarily arduous.
The state teachers union is suing the state over how big a role student test scores should play in a teacher’s rating, thus holding up the process.


Yeah, well they should, no. Why is NYSUT suing? Because.....The law on a teacher evaluation system was originally developed in a cooperative effort between the state and NYSUT. It called for 20 percent of an evaluation to be based on test scores, 20 percent on local assessments and 60 percent on principal evaluations. But at the last minute, the plan was changed, calling for up to 40 percent of a teacher’s grade to be determined by statewide test scores. Please stop the disingenuouty.

Either districts and unions agree to an evaluation structure in 30 days, or he’ll pass one for them during the budget process. It’s a bold yet necessary move to get a deal done.

Oh, oh. Looks like it's going to be a showdown on Western Ave. Looks like Sheriff Andy is going to take on those nasty evil teachers and show them. Whip 'em out at twenty paces. Just think Governor Andy will whip something else out to prove to all that he is a man.
Last year, a group of solutions-oriented Educators 4 Excellence teachers crafted thoughtful recommendations that deserve to be considered. They suggested a multi-measure evaluation system that includes student-growth data (the only objective picture of a student’s progress we now have), but also multiple classroom observations and student surveys, as well as standards of professionalism such as teacher attendance and contributions to the school community.

These ideas are backed by research, including the recent Gates Foundation Measures of Effective Teaching study, showing that a combination of these factors creates the most fair and reliable system.


Yes of course! If some dumb ass Gates Foundation study says it's true, well gosh diddly darn, it must be true! But, E4E will never bite the hand that feeds it.

In other words, we already know what works.

Teachers don’t need an evaluation system to make them work hard; they already do. But such a system will help us to work smarter.

As elementary-school teachers in The Bronx, we knew there were students who left our classrooms well prepared,


As elementary teachers? You mean as former elementary teachers. Let's be honest OK? As far as students that left your classrooms well prepared, the facts seem to differ. Little Evan, we call on you to show us your scores!!!!!!!!

but also that there were others whom we could have helped more if we’d had the support and feedback all professionals deserve.
So why didn't Sheldon Benardo principal of PS 86 give you support and feedback? Nothing was preventing him from doing so.
So it goes on. These two are dangerous. I had quite a Twitter conversation on Sunday night about the dangers these two and their quasi Hitler youth organization present. Yes, they are small, and yes, most of their members sign up to watch a train wreck, but the smugness and duplicity these two show is a danger, could be a danger and we must stop E4E.

We as teachers, as educators, as parents, as citizens of this country can't make the same mistake that Chamberlain made in 1938.

Any view or opinion represented in the blog comments are personal and is accredited to the respective commentor / visitor to this blog. SBSB and The Crack Team are not responsible for the comments left on this blog.